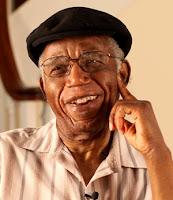 A great carrier of living history is dead. The breaking news on the morning of the 21 March was the death of Chinua Achebe in a Boston hospital, Massachusetts. If the name Chinua Achebe does not ring any bells for you, try looking him up in Wikipedia.

Achebe was a pioneer amongst African writers in English. He was a Nigerian novelist, poet, professor and critic. Often hailed as the “Father of modern African fiction” his first novel Things fall apart is the most widely read book on African literature in universities around the world. It sold more than 12 million copies and has been translated into 50 languages since it was published in 1958. He followed up his successful debut with other novels such as Arrow of God, No longer at ease, A man of the people and Anthills of the Savannah. But literary success came with a great hardship. In 1957, Achebe sent his only copy of his handwritten novel, Things Fall Apart to a typewriting company in London. He enclosed a fee of 22 pounds for typing it. Many months went by with no response from them. Only after his boss visited the company and upbraided them did they type it and send it back to him. Achebe then sent the novel to an agent in London but was rejected by several publishers with the excuse that “fiction from African writers had no market potential.”

Finally it was published by Heinemann and cautious reviews said it was a book that “genuinely succeeds in presenting tribal life from within.” More reviews came in saying it was an excellent book. Thus was African literature in English born in the western world. Achebe’s book filled in the missing Afro-centric perspective on African culture that Euro-centric writers like Joseph Conrad had totally misrepresented. He became the native voice that could not be ignored because it was the voice of the insider and therefore the voice of authenticity. Like every colonised society, a great deal of anthropological writing existed on the Nigerian tribes by western anthropologists. Achebe’s novels offered the other Africa that had not been represented in these writings. He focused on the oral traditions of his native Igbo society as he created a village world with its own metaphors and its own world view. Achebe, like Raja Rao, was translating the reader’s thought patterns to that of Igbo thought patterns by insistently structuring his books after an African ethos. He used the Igbo oral tradition, incorporating folk tales, proverbs and sayings into the narrative. Importantly, Achebe used the oral tradition as a commentary on modern life and as a prophetic discourse on the growing corruption and nepotism of African political life. It is a discourse applicable to all tribal societies in transition. He showed that traditional culture could still be relevant in contemporary life as he used the lessons of orature as it became termed from then on, to teach and convey lessons for life. In Achebe's work we see the continuing relevance of the oral tradition as art and also as social reform.

Achebe explored the confrontation of the old with the new in his own society. Born in 1930, he grew up in a colonized Nigeria where society emphasized western education and devalued tribal ways of thinking. He attended the St Philip's Central School where his teacher noted his intelligence. As a child Achebe loved to listen to the stories of his people. His interest in his cultural roots and folk-ways has carved a permanent place for them in African literature. Along with Ngugi wa Thiongo, the Kenyan novelist, Achebe worked to decolonise the literary culture of Africa, putting back value in the culture that had been suppressed by the colonial powers. The beautiful consequences of their efforts can be seen in the many courses on African writing in universities worldwide today. What Ngugi was theorizing about in his essay, Decolonising the Mind, Achebe put into practice in his novels and storytellings on Igbo culture. He explored the myths of colonisation and exposed the thefts of land and mind by the coloniser.

Chinua Achebe and the African writers have been intrinsically relevant to writing in the Northeast. They placed value in the tribal story. They proved that the stories of the indigenous people were beautiful, unique and yielded meaning. Achebe infused courage in tribal writers by writing unashamedly about his culture and his village world and exposing colonial lies. He Africanised the English language peppering it with Igbo words and borrowing the structure of Igbo in the dialogues of his colourful characters. For the first time, both western and non-western readers heard the voice of the colonised and got to understand the cultural meanings of the practices that were dismissively labelled barbaric and savage by the coloniser. Thanks to Achebe the inclusion of books by native writers in the school syllabus was begun as the trend of mental decolonising reached even the Northeast of India. Research on Northeast writers is beginning to pick up in Indian universities.

The Igbo proverbs that he uses are easily applicable in a conflict torn Northeastern context: “When two brothers fight, a stranger reaps the harvest” (Arrow of God 1964:131), or, “If one finger brought oil, it soiled the others” (Things fall Apart 1958:114). At the same time they are for all cultures, tribal or not. He brought the Igbo proverbs to life in their English selves: “Wisdom is like a goatskin bag; every man carries his own.” Achebe the writer, opened that goatskin bag of wisdom which every Igbo carries. And by doing so, he gave dignity to the stories of all tribal peoples which were repressed by centuries of colonisation.